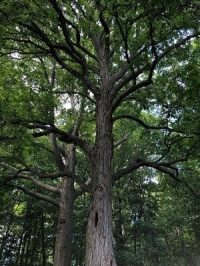 The majestic hickory tree at 270 Breezewood on the former William Saddler II property. Photo by Will Krause

Roy Larick, retired archaeologist and newly designated member of the Euclid Tree Commission, contacted me with his plan to create a master list of all of the known Moses Cleaveland trees, including precise latitude and longitude locations and current status and size of the trees. He provided me with a list of trees in Bay he compiled from Kay Laughlin and my articles and other sources. It showed that four trees had been designated in 1946, two in 1971 and five in 1976 (11 total). His project eventually got folded into the goals of the Forest City Working Group under the City of Cleveland’s Office of Sustainability. They asked me to go into the field to gather as much information as I could.

The results for Bay: Two healthy trees, two stumps, seven gone. One of the seven included the Black Oak on Sunset which had been in decline. When new owners bought the property this year, all that was left was the stump, which they had removed.

The two healthy trees are an approximately 55-inch diameter white oak behind the house at 27408 West Oviatt, visible from both West Oviatt and Donald Drive, and a 32-inch diameter hickory in the backyard of 270 Breezewood Drive. The owner explained to me that this rear area of their yard and the adjoining yards was once part of a deep lot that went with the William Saddler II house at 30165 Lake Road. There are many large specimens in this parklike setting. Unfortunately, the hickory tree is not visible from the street so enjoy the accompanying pictures but please don’t trespass on their property.

It is not that the trees grew that much since 1976 but the official diameter of a mature tree is measured at 54 inches above ground. This is done to avoid the root flare at the soil line.

The beech had been healthy until about 10 years ago. The owners even commissioned a new plaque for the tree because a split in the trunk had split the original plaque. Unfortunately, they were never able to mount the new plaque because before they could the tree completely died. Since it is near their neighbors' house they had the tree removed.

Besides the two remaining trees, the best news is that there are a number of other large trees that have been discovered in the process that, if there is a list of 225 trees dedicated in 2021 to celebrate the 225th anniversary of Moses Cleaveland’s landing, may qualify.

Before I submitted the list in June, I was in contact with Kay through her husband, Gerald, trying to pinpoint the exact location on the former gun club property of the tree Kay called “Her Majesty.” If anyone can tell me exactly where that tree formerly stood, it would be appreciated. My email address is wrk295@aol.com.

The results of the whole Moses Cleaveland Tree survey update will eventually be hosted on the Holden Arboretum website, holdenarb.org.

William R. Krause, AICP retired as the Assistant Planning Director of the City of Westlake in 2020 after over 30 years with the city. He also served on the Bay Village Planning Commission for 5 years. He is currently a trustee with the Bay Village Historical Society and a former board member of the Westlake Historical Society. He was chair of their Lilly Weston Committee and is a member of the Reuben Osborn Learning Center Steering Committee. He is also currently a Trustee of the Western Reserve Architectural Historians. He has been married to Debra for 39 years and is the father of three grown children, grandfather of four and owner of a Shih Tzu named Cammy.