Hepatitis C: A virus with a cure 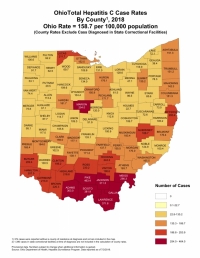 This map shows the county rate of Hepatitis C cases per 100,000 residents in Ohio, which had a statewide total of 18,500 cases in 2018. Graphic courtesy Ohio Department of Health

In a Covid-19 world, many important health issues are carpeted.

HCV is a chronic, blood-borne liver disease and a leading cause of end-stage liver disease, liver transplant and liver cancer. About 1% of Americans have it; most have no symptoms and don’t know they have it. For example, in 2018, 3,621 new cases of HCV were reported to the CDC. But experts estimate the actual number was closer to 50,300.

The three common liver infections are Hepatitis A, B and C. Since vaccines became available in the 1990s, the rates of Hepatitis A and B have declined.

Luckily, for HCV, instead of a vaccine, we have an effective viral “cure.”

But in the U.S., HCV infection isn’t controlled. The rate has increased threefold in the past decade due, in part, to an increased rate of injection drug use and wider screening. HCV can also be transmitted through childbirth, contaminated tattooing/medical procedures, sex, etc.

Traveling with the opioid crisis, acute HCV infection spreads quickly among young people between the age 20 and 39 – and in regions like Appalachian Ohio. For example, the rate of HCV infection in Pike County (463 per 100,000 population; the highest) is 20 times that of Holmes County (23 per 100,000 population; the lowest).
. Ohio and eight other states (California, Texas, Florida, New York, Pennsylvania, Michigan, Tennessee and North Carolina) account for more than half of our national HCV infection.

So what happens when one is infected with HCV? First, the immune system will try to clear it. But half can’t and are infected long-term.

In chronic infection, the liver continues to work well for decades and shows few (e.g. fatigue, depression) or no symptoms until much of the liver is knocked out and scarred over – cirrhosis.

But it doesn’t have to be this way: Screening (a simple blood or finger-stick test) can pick up HCV at any stage.

The treatment is also simple: Take pills for two to three months. Four months after treatment, more than 95% have no detectable virus in their blood. Studies show a one-time HCV treatment can reduce chances of developing cirrhosis and liver cancer by 64-71%, and reduce liver-related deaths by 90%.

Please believe me, viruses – as seen with SARS-CoV-2 – are incredibly difficult, if not impossible, to treat. The success of HCV treatment is unique and making history.

The pills are well tolerated, and as far as I’m concerned, the most toxic side effect is the cost.

The WHO plans to eradicate Hepatitis C by 2030. Universal screening puts us on track to achieve just that.

Yeah, I thought you could do with some good news.