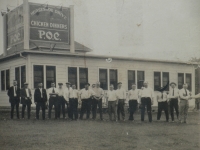 You have probably seen the “Store Closing” and “Building Sold” signs at Warner Interiors at 23123 Center Ridge. By the time this story is published the store will have closed. The building will be torn down to make way for The Villas at Westin Pointe – a project spearheaded by Drew Siley of Liberty Development, consisting of 25 two-story townhouses.

The building was constructed initially as the Horseshoe Inn by the Lemieux family in about 1918 after they purchased land on the south side of Center Ridge from the Sperry family. The Sperry family had owned and operated the Sperry Inn since 1824 just west of this site (approximately where Pebblebrook is now located).

It was in 2010 when descendants of the Lemieux family stopped in to talk to me with pride about their family and the Horseshoe Inn. They shared pictures with me which accompany this article and details about it which I have since lost. What I do know is that on April 9, 1917, Hannah Lemieux purchased a 12-acre site extending west from the Rocky River border from Scott and Sarah Sperry.

Hannah died on June 25, 1918, and the property passed to her husband, Joseph. By 1920 Joseph had married a woman named Mary. A Hopkins plat book for 1927 shows that the property has been divided between them, with Mary owning the approximately six westerly acres with a building matching the footprint of today’s Warner Interiors constructed on it.

The pictures of the Horseshoe Inn accompanying this article most likely show the employees of the Inn in front of it with a large sign advertising “Horseshoe Drive,” “Chicken Dinners” and "P.O.C." Based on the caps several of the men are wearing, the tree next to the building, which is attempting to recover from extreme root disturbance, and the sign advertising beer, these pictures are most likely from 1918 or 1919, shortly after the construction of the building.

My understanding is that Prohibition went into effect in the Cleveland area on May 27, 1919 – seven months before the 18th Amendment to the U.S. Constitution's ban on the production, importation, transportation and sale of alcoholic beverages occurred on Jan. 17, 1920.

How the Horseshoe Inn fared during Prohibition is unknown. Did they abide by the law or were they a speakeasy like the White Oaks Restaurant on Cahoon Road?

Even the name of the Inn is a little bit of a mystery. The rooftop sign says “Horseshoe Drive.” Horseshoe “Boulevard” appears on the 1927 Hopkins Plat book, but not on the 1920 one. Were the owners of the Inn part of the team attempting to build a speculative horseshoe shaped road north and south of Center Ridge all the way to North Olmsted? Is that how the Inn got its name or was the road named after the existing Inn?

And why does the rooftop sign say Horseshoe “Drive” when even the 1927 Plat Book says Horseshoe “Boulevard”? Did the Lemieux family anticipate that Prohibition was coming and just so happen to locate their new Inn near Sperry Creek which conveniently empties into Lake Erie – just a boat ride away from Canada?

A directory published in the late 1950s lists “Johnson’s Wayside Furniture” at this address. A 1976 directory lists “Johnson’s Wayside Furniture” and “Bergen Refinishing & Furniture Repair” at the same address. In 1978 Arthur and Clara Johnson sold the property to Alphonse and Josephine Molina. It is the Molina family who owned and operated Warner Interiors and in 2000 even purchased the house to the west that Joe Lemieux once occupied.

What is remarkable is that the exterior of the building, and even the layout of the driveway, has been basically unchanged for over 100 years. Even part of the main entrance which protrudes awkwardly from the northeast corner of the building is visible in the early photographs and plat books. The major change to the exterior was the installation of the display windows on the north façade.

Once the townhouses are built may the new owners decorate them with the style and grace of the Molina family and raise a glass to toast the Lemieux family.