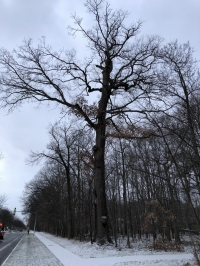 One of the surviving Moses Cleaveland Trees designated in 1946 in Clague Park. Photo by Will Krause

The Moses Cleaveland Tree plaquing project was started in 1946 to commemorate the 150th anniversary of Moses Cleaveland landing here in 1796. Its goal was to designate 150 trees that were growing in the Cleveland area when Moses Cleaveland arrived. Subsequent surveys were done in 1971, 1976 and later to check on the status and size of the originally designated trees and add new trees to the list.

What we learned is that the records for the 1946 designated trees were pretty solid but then the whereabouts of the list of subsequently designated trees, if there ever was one, is unknown. Also, the exact location of some of the trees was not clear.

Roy Larick, retired archaeologist and newly designated member of the Euclid Tree Commission contacted me disclosing his plan to create a master list of all of the known Moses Cleaveland trees, including precise locations and current status and size of the trees. He provided me with a list of trees in Westlake he compiled from my articles and other sources. It showed that nine trees had been designated in 1946, and one additional tree in each of the years 1971, 1976 and 1986 (12 trees total). His project eventually got folded into the goals of the Forest City Working Group under the City of Cleveland’s Office of Sustainability. They asked me to go into the field to gather as much information as I could about the trees.

Here are my results: One totally healthy tree, three relatively healthy trees with some dieback due to advanced age, one appearing to be dying due to significant bark loss at the base, one standing dead, six gone forever without a discernible trace (except maybe an appearance on old aerial photographs).

The one robustly healthy designated Moses Cleaveland tree, and the largest designated tree in Westlake, is a red oak located at the rear of Evergreen Cemetery. It has a diameter of 81 inches at 54 inches above grade (known in the profession as DBH – “diameter at breast height”). The next largest is a white oak in Bradley Woods with a possible DBH of 76 inches. It is visible from the Quarry Trail and looks even larger because the trunk is oblong and appears to be 82 inches DBH from one direction. It is so large that one of its limbs that broke off measures 70 feet long and 42 inches in diameter. The width of the crown is greater than 100 feet.

The next two largest designated trees are both 56-inch DBH white oaks. One is located in the Travel Centers of America parking lot and the other along the southern edge of the Clague Park forest on Hilliard Boulevard just west of the walking trail.

A particular challenge for this survey was trying to locate the seven oak trees that were designated Moses Cleaveland trees in 1946 in Clague Park. The description of the locations was vague, and a previous attempt in 2012 located only one tree with a plaque. While there are many, many large healthy oak trees in this forest with a DBH of 30 inches to 44 inches, all of the designated trees in Clague Park ranged from 40-49 inches DBH in 1946, when they were plaqued. So, all but one tree, a 44-inch dying white oak were eliminated from consideration as possible previously designated Moses Cleaveland trees. The dying 44-inch tree matches the location description for a 40-inch DBH tree in 1971.

The one plaqued tree found in 2012 in Clague Park was already dead. It still stands, providing habitat, but no longer has its plaque. It measured 48-inch DBH in 1971, 2012 and today.

Roy Larick has pointed out that plaquing living things that have a life span has its limitations because eventually all of the Moses Cleaveland trees will die. White oaks are the most common surviving Moses Cleaveland trees. They typically live no more than 200 to 300 years, though some hardy specimens have been known to live 600 years. In 2021 it will be 225 years since Cleveland’s founder arrived in the Western Reserve.

As I submitted this story for publication there is concern about the potential loss of a magnificent, healthy, white oak in Bay Village. It is located at 24736 Lake Road and while it is not a designated Moses Cleaveland tree it is a priceless survivor that may be as much as 344 years old. It is a striking specimen located on a blufftop overlooking Lake Erie. Because it is not visible from the street it was never nominated as a Moses Cleaveland tree but if it is 344 years old then it was around when Moses Cleaveland’s great-grandfather was born!

It was the pride and joy of homeowner Abby Sammon, before she died in December 2018. She kept the tree in tip top shape for over 40 years with the help of professional arborists. The property was sold in November of last year and the new owners plan to demolish the home and the rumor is, possibly the tree. I hope and pray that the rumor is not true.