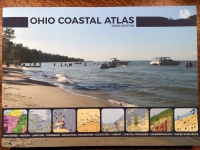 Cover of the Ohio Coastal Atlas Third Edition published by the Ohio Department of Natural Resources. A great resource for every coastal property owner.

The Ohio Department of Natural Resources' Ohio Coastal Atlas Third Edition was published in 2018 by ODNR's Office of Coastal Management. It features information on the Lake Erie Watershed, including a series of maps on just about any topic one can think of. It is available to view online at ohiodnr.gov and also as a free print publication.

One of the many maps in the Atlas is one showing a snapshot of the natural vegetation that was original to Ohio’s Lake Erie region at the time of European exploration and settlement (circa 1800). While much of this vegetation has been replaced by man-made surfaces and landscaping, if one looks carefully at our current environment some of this native vegetation can be observed, particularly ancient trees and their descendants.

The same topography, soils, micro-climates and general drainage patterns have persisted until now to support the same types of trees that have grown in northeast Ohio since a few thousand years after the last ice age ended.

The map shows that the Westshore area was primarily what is called a mixed oak forest due to somewhat dry soils, though Lakewood and the Westshore portion of Cleveland transitioned into a mixed mesophytic forest where soils have a moderate amount of moisture (consisting of tulip trees, certain oaks adapted to moister soil, chestnut and hickory). Further from the lake there were areas of elm-ash forests in swampy areas and beech forests where the soil was consistently moist but not swampy.

In 1949, Dr. Arthur B. Williams, the Cuyahoga County Metroparks' first naturalist, wrote a bulletin for Holden Arboretum titled “The Native Forests of Cuyahoga County, Ohio.” A couple of interesting things he points out are that the only evergreen trees native to Cuyahoga County in 1800 were white pines and eastern hemlocks and that Cuyahoga County is “at a sort of ecological crossroads in North America.” He says that Cuyahoga County is on a tension line between eastern and western, northern and southern plant associations and that our climate is transitional between that of the east coast and the continental interior.

While the east and south sides of Greater Cleveland have the hilly topography of the Appalachian foothills, we in the Westshore are at the eastern edge of the flatlands that start becoming swampy in Lorain County and eventually became what was known as the “Black Swamp” in the Toledo area.

Most of the Westshore area is part of the level Lake Erie Plain and, as any gardener knows, the underlying clays are very dense in this area and this effects how well the land drains and what trees grow well on it.

He writes that (even in 1949) in the western section of the Lake Erie Plain there were “few old forest remnants except in the valley of the Rocky River within the Cleveland Metropolitan Park System. Here, on the sides of the valley walls, when not too steep, and on lands above flood plain level, the beech-maple forest, with its characteristic associated species, occurs. At the top of the slope the common trees are black oak, red oak and white oak.”

Dr. Williams also states that on the lake plain, eastern hemlock appeared as a tree of swampy areas or in small ravines. White pine was not an abundant tree anywhere in Cuyahoga County even 150 years ago and was even more rare in the Westshore area. He states that white oaks were the most common oaks after red oaks and that along the Lake Erie shore bur oaks were common.

Holden Forests & Gardens has published a brochure, “Forecasting the Future of the Forest in Northeast Ohio’s Changing Climate.” They emphasize that Northeast Ohio’s climate will continue to get warmer and wetter. The amount of moisture retained seasonally in the forests will increase. The trees that will be most affected negatively include beech and those trees for which northeast Ohio represents their southernmost range including eastern hemlock, white pine, and sugar maples. Modeling suggests that bitternut hickory; black, scarlet and bur oak; black walnut; and eastern redcedar will be less affected.

Modeling also suggests that trees that are currently on the northern edge of their range including sweet gum, blackjack, chinkapin and post oak, persimmon, and eastern redbud will become more common and thrive. One way to mitigate climate change is to plant more trees and these types of native trees are good candidates to plant!