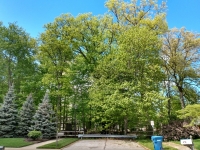 Wooded lot that is the site of the proposed Red Oak Woods 2 Subdivision.

I love living in Bay Village. It's the people that make a community, first and foremost, but I also love Bay Village for its natural environment; its trees and its creeks, in particular. At a time when centenarian trees are being torn down and climate change presents increasing risk of flooding, I applaud our city government for taking notice and discussing ways to preserve the natural environment in our city.

For example, Bay Village has a Tree Commission that is, among other things, looking at ordinances passed by other cities to maintain their natural beauty and the environmental advantages afforded by a healthy tree canopy with an eye towards adopting similar ordinances in Bay Village.

It is perplexing to me, then, when the city government is not united in action to prevent development that threatens a wooded lot that also serves as a wetlands adjacent to a protected waterway. I am referring to a proposal that has come before the Bay Village City Council to create a new subdivision, Red Oak Woods 2, on Tuttle Creek.

The proposal would add two large homes to an existing single-family lot alongside the creek. According to the EPA's classification of wetlands, the low-lying land adjacent to Tuttle Creek would be a “non-tidal marsh.” The EPA explains the importance of non-tidal marshes as follows: “Due to their high levels of nutrients, freshwater marshes are one of the most productive ecosystems on earth. They can sustain a vast array of plant communities that in turn support a wide variety of wildlife within this vital wetland ecosystem. As a result, marshes sustain a diversity of life that is disproportionate with their size. In addition to their considerable habitat value, non-tidal marshes serve to mitigate flood damage and filter excess nutrients from surface runoff.”

The proposed subdivision still requires approval from council before moving forward, however, which positions the mayor and members of council to be able to act to protect trees and wetlands from development. The matter has been referred to the Planning, Zoning, Public Buildings and Grounds Committee which first took up the proposal at their meeting on May 10.

At that meeting, it became clear that council was divided. This seems at odds with public statements of the city’s goals and values. For example, although the Bay Village Master Plan calls for “environmentally sustainable design practices when adding or replacing infrastructure,” the Red Oak Woods 2 Subdivision would extend a city street against the wishes of residents in the neighborhood and would result in the loss of dozens of established trees.

Similarly, the Master Plan also states, “The city will make a concerted effort to alleviate storm water management and flooding issues through innovative policies and green infrastructure.” The proposed subdivision, however, would bury wetlands with landfill and hard surfaces which will drain directly into Tuttle Creek and, in turn, to Lake Erie.

Ward 1 in Bay Village, where the proposed subdivision is located, is already dealing with flooding issues and the existing infrastructure has been overwhelmed in recent storms in 2015, 2017, and 2020. The pace at which development in the ward is progressing will only exacerbate the existing storm water issues. In this particular instance, at least, it seems there is a difference between what the city government says and what, when the time comes for action, it may choose to do.

In the spirit of fairness and transparency, the mayor and several members of council have visited the site and spoken to neighbors. Not all support the proposed subdivision but it is unclear whether there will be enough votes to stop the development.

If you are a Bay Village resident, please consider taking a moment to go to the Bay Village website to get the email address for your council person and the mayor to respectfully let your feelings about this project be known. There is another meeting of the Planning, Zoning, Public Buildings and Grounds Committee scheduled for 6 p.m. on Monday, May 24, to further discuss the proposed subdivision. More information on the meeting can also be found on the city’s website.

Joe Ptak is a high school teacher living on the Westside for 25 years.