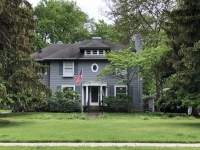 1914 Clifton and Adeline Aldrich home at 28905 Osborn Road. Photo by Will Krause

Clifton Aldrich is the great-grandson of Aaron Aldrich III who constructed the beautifully preserved, circa 1829, home which still stands at 30663 Lake Road (on the south side of Lake Road just east of Bradley).

According to “Bay Village: A Way of Life” the Bay Village Aldrich family are descendants of George Aldrich who immigrated to America from England in 1634. Aaron Aldrich II was born in 1740 and served in the American Revolution. Aaron III and his wife Elizabeth Winsor Aldrich immigrated to Dover in 1816. Clifton’s grandfather William was their second child, born in 1817, he married Martha Bassett in 1840.

According to “Retracing Footsteps: Lakeside Cemetery,” in 1903 a 25-year-old Clifton married Mary Adeline Barker and was among the leaders who led the secession from Dover Township and organization of the Village of Bay. He was the first treasurer of the village and organized the volunteer fire department.

In 1910 Clifton Aldrich purchased a 19.5-acre parcel of land on the south side of Osborn Road for $2,914. It extended south all the way to the railroad tracks. It had 522 feet of frontage on Osborn. He ran an orchard on the property. His next easterly neighbor, Wirt W. Dodd, had a parcel of nearly the exact same dimensions. They would eventually go into business together and form the Dodd Aldrich Realty Co. which developed an approximately 50-acre subdivision immediately east of Dodd’s property called the Forest Park subdivision, in the early to mid-1920s.

In 1914 Clifton Aldrich constructed a home and barn valued by the tax assessor at $2,450. The home, the subject of this article, still stands today at the southwest corner of Dwight Drive and Osborn Road. The style of the existing barn behind the house suggests it too dates from 1914, and was probably used in the operation of the orchard.

The handsome home has characteristics of both the Colonial Revival and American Foursquare. Both styles that were popular in 1914. The columned entry porch and oval window above it are both classically inspired and the general massing of the home and the hipped roof are characteristics of a “Foursquare.”

By 1931 the home and acreage were transferred into the name of Clifton’s wife, Adeline. In 1932 Clifton was appointed Bay’s fire chief for one year. By 1938, in the depths of the Depression, the property was in the name of S.H. Squires, Superintendent of Banks in charge of the liquidation of the Guardian Trust Company of Cleveland, Ohio. Clifton may have overextended himself in his real estate ventures or perhaps this was a business decision and they lost the house. In 1942 they are living at 445 Cahoon Road, which was a home on the Cahoon Park property, just northeast of where the skate park exists today.

According to an article written in 1960, reprinted in “Retracing Footsteps,” Bay officials had coaxed him out of retirement to supervise the land left to the village by the last of the Cahoons. He and Adeline moved into a 100-year-old house at 445 Cahoon Road, where they celebrated their 57th wedding anniversary. The article goes on to say that Bay High School students and visitors to the park know him as “Gramps” and usually stop to chat a while. He died in 1970, at the time the oldest native-born Bay Village resident. “Bay Village: A Way of Life” has many pages of reminiscences by him, including his memory of witnessing the first steam locomotive come through Dover in 1882. There is so much Bay history wrapped up in this one man’s life!

In 1940 the 19.5 acres and home were purchased by Agnes Maska of Lakewood Heights Boulevard. The 1946 Bay Directory lists Edward and Kathryn Stanton as living at 28905 Osborn with their three children and perhaps a relative or servant. In 1952 the property transferred from Mrs. Maska to Kathryn Stanton; in 1961 from Kathryn Stanton to Jean Debarr and Hazel Daniels. The home was occupied by the Austin and Laura Dalhart family and their six children in the 1960s. Debarr and Daniels sold it to the current owners in 1972, by then the property was reduced in size to 103 feet along Osborn and 300 feet deep. Dwight Drive had been constructed in the mid- to late 1960s.

We can thank the current owners for requesting a century home plaque and sending us on this fascinating journey through time.