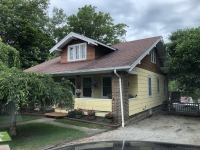 It all started with a piece of wood with a shipping label on it. Daniel White said he has been finding labels on the back of woodwork as he remodels his Craftsman bungalow at 24756 Detroit Road. The return address on the label of 925 Homan Avenue, Chicago, confirmed that this woodwork was milled for Sears at one of their Ohio lumberyards in Norwood.

He purchased the home from the estate of Charles W. Hublitz in 1980, who Daniel said was like a grandfather to him back in Sheffield Lake, Ohio, where Mr. Hublitz owned a farm.

The label on the wood was addressed to Charles W. Hublitz of North Dover, Ohio, by way of the B & O and Nickel Plate Railroads and delivered to the Bay Village Railroad Station. Sears had been selling building materials through their catalog starting in 1895, and whole house kits starting in 1908. The county estimated that the house was built in 1908. However, the house doesn’t look like any of the models offered in the early years.

County records indicate that in 1891 Charles J. Hublitz (Charles W.’s father) first purchased 15 acres of land on the north side of Detroit Road in Original Lot 78 of Dover Township. The land extended north from Detroit Road all the way to the Nickel Plate railroad tracks.

U.S. Census records of 1900 indicate that Charles J. Hublitz was born in Germany in 1858 and immigrated to the U.S. in 1881. In 1890 he married Louisa L. Hornfischer, who had emigrated from Germany in 1887. Their son “Charlie” was born in 1891, and they were living in Dover by 1900. Charles J. was a farmer and could not read or write in 1900 but he could speak English and was a naturalized citizen. By 1910 there are five children in the household. Based on the names of nearby neighbors in the census it appears that Charles and Louisa were living in a house near their land. Based on tax records they built a home on their land in 1911.

In 1914 they purchased vacant land from the Hort family who were westerly abutting neighbors. This land eventually became the site for the subject house.

According to "Bay Village: A Way of Life," in 1917 Charles W. Hublitz, at 26, was a founding member and trustee of what eventually became Bay Presbyterian Church. In the 1920 U.S. Census he is still living with his parents and younger siblings. Both father and son are listed as fruit farmers. Charles W. married Lena Stampfli in 1922. When Charles J. died in 1923, he was buried in Evergreen Cemetery with a son, William.

The subject house does not appear on a 1920 plat map. Tax records indicate that it did exist by 1926. It was built by Charles W. around the time of his marriage, on property that his parents still owned, west of their 1911 house. More research is needed to determine the exact year of construction.

When Charles J. died in 1923, the land and houses were eventually passed on to his wife and heirs in 1931. That same year Charles W. and Lena purchased a 95-foot-wide parcel of the land from their mother-in-law and other heirs which matches the legal description of the property now owned by Daniel White.

In the mid-1930s, as well as in 1976, Charles W. Hublitz was residing at 24756 Detroit Road according to address directories. A 1945 directory lists him owning 70 acres in Westlake at that time. A 1956 article in the Elyria Chronicle Telegram notes that he owns and farms 75 acres in Sheffield but lives elsewhere and is against the proposed annexation of his land to the City of Lorain.

It appears that the five-bedroom bungalow is the Vallonia model, with some customization which was encouraged by Sears. The Vallonia was first offered by Sears in 1921. It was one of their best-selling models. The Whites' home is different in that intricate wood porch columns have been replaced by brick piers and a bay window on the west façade has been eliminated and a side porch and entrance added.

Back in 2010 this author, Tom Phillips and the late Sally Price drove up and down the streets of Bay Village in search of surviving Sears kit homes. We prepared display boards of the results which were part of an exhibition in the Reuben Osborn Learning Center. An article was written by Tom Phillips for the April 19, 2011, issue of the Observer about the exhibition.

The search was widened to include Westlake and several more Sears homes were found. Here, right under our noses was another Sears house waiting to be discovered. See the display when the Osborn Learning Center re-opens on July 25.