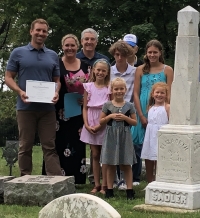 Jim Sears, a member of the Bay Village Service Department, was awarded an Excellence in Historic Preservation Award on July 8 by our local chapter of the Daughters of the American Revolution (DAR).

In 2018, the Bay Village Historical Society sponsored Jim’s attendance at a workshop on Gravestone Restoration and Preservation. He put the knowledge he gained at the seminar to work in our small, historic Lakeside Cemetery. He carefully researched the scope of renovation needed for the entire cemetery, and for specific headstones and monuments.

Jim has restored dozens of stones. Some stones needed raising, straightening and precision cleaning, to make them legible again. At times, heavy equipment was needed. The stones that Jim restored are straighter, brighter and most importantly, legible.

Under threat of severe thunderstorms, our photographer asked the group to hurry to one of Bay’s Revolutionary War veterans' headstones. Jim said that everyone should go to Christopher Sadler’s because his stone is tall and David Foote’s is flat. Jim knows his gravestones.

The cemetery dates back to 1814. It was the first cemetery in then Dover Township. Many of the area’s first settlers are buried there. You can visit the cemetery at 29014 Lake Road, near Huntington Beach Reservation.