Home to Jewish gangsters? The history of 384 Fordham Parkway, Part 2 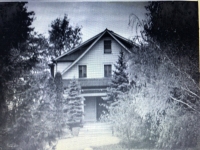 A 1938 Cleveland News photograph of 384 Fordham Parkway. The photo is now part of the Bay Village Historical Society collection.

As outlined in Part 1 about this house, Dr. David Francati of Bay Dental, the current owner of 384 Fordham Parkway, told me a number of stories about his home. He said that it was built by one of the owners of a brewery which bottled Gold Bond beer. That it was once known as a “love nest” run by “Madam” Christine Ritchie, the “gray-haired widow of a former lake captain” in the 1930s. That it was then an orphanage where some of the kids crossed an open porch to sleep in the attic. That it had a fire and then was repaired and turned back into a single-family home.

Could all of this be true? Beyond the incredible stories, the research had many unexpected twists and turns, partly due to Bay’s habit of changing addresses in that part of the city over the years! We covered the “love nest” part of the story in Part 1. Let’s go back to the beginnings of the house.

In 1914 Samuel Goldberg owned a nearly 40-acre slice of land which extended south from Lake Erie along the west side of Clague Road all the way to the Nickel Plate railroad tracks. W.H. Lawrence, the owner of the mansion that forms the heart of the Cashelmara development, owned over 40 acres to the west and 101 acres east of this parcel. In 1919 Mr. Goldberg subdivided the land to create the Bay Village Park subdivision and what became Cliff Drive, Fordham Parkway and lots on segments of the east/west Lake, Bruce, Russell, Wolf, Oakland and Knickerbocker Roads.

Tax records indicate that the subject home was constructed in 1921, when it was known as 23930 West Lake Road and was owned by Sol Peskind. The home was valued at $16,000 that year. Sol had purchased 10 parcels from Realty Realization Co. which had purchased many of the undeveloped lots from Mr. Goldberg. Sol Peskind’s lots included all of the parcels west of Fordham Parkway and north of Lake Road in the subdivision as well as several more, farther east on the lake side of Cliff Drive.

Sometime after 1923 and before 1926 a second structure worth $940 was constructed south of the main house on sublot 36 abutting Lake Road. This was most likely what Dr. Francati describes as a carriage house that once stood alongside a driveway west of his home that went directly to Lake Road. According to him it was converted to a house on Fordham Parkway and demolished about 30 years ago for a new house. By 1927 Sol Peskind’s lots, the house and carriage house reverted back to Samuel Goldberg. It was in 1928 when the decision was made to not extend Cliff Drive west past Fordham Parkway.

Were Sol Peskind or Samuel Goldberg connected to the brewery that brewed Gold Bond beer? It is entirely possible but I have not been able to confirm that. The story that Dr. Francati heard would suggest that it was Sol Peskind, the first owner of his home, that was affiliated with the brewery. Prohibition from 1919 to 1933 put many breweries out of business.

It was the Cleveland and Sandusky Brewing Company that brewed Gold Bond beer. They were formed from a merger of 11 northern Ohio breweries in 1897. During Prohibition in the 1920s and early 1930s they stayed in business manufacturing carbonated beverages and very low alcohol “near-beer.” Not a great time for brewery owners to be building large homes on the lakeshore, unless there is some connection to money changing hands “under the table”?

It was while Sol Peskind or Samuel Goldberg owned the home that Christine Ritchie may have begun operation of the “love nest.” Were these two men legitimate businessmen or, as the My Jewish Learning website states, part of “A little-known chapter of Jewish American history [which] concerns the Jewish gangsters of the 1920s and 1930s … swept up in the speakeasy movement during Prohibition, they continued to make money off of bootlegged liquor, prostitution rings, gambling, [and] racketeering”? The website mentions a Jewish gang in Detroit involved in the distilling and brewing business in those years.

By 1937 the home was owned by Samuel Goldberg’s Home Centers Incorporated with offices located at 614 Engineers Building in Cleveland. As we know the subject home was occupied by Christine Ritchie’s “business” in 1938. It was occupied by Peter Edson sometime before 1939 and then by John and Cora Humphrey in 1939. Home Centers Incorporated then sold it to the Humphreys in 1943.

We will discuss the orphanage that occupied the home from 1939 until 1946 and subsequent owners in Part 3.

William R. Krause, AICP, retired as the Assistant Planning Director of the City of Westlake in 2020 after over 30 years with the city. He also served on the Bay Village Planning Commission for 5 years. He is currently a trustee with the Bay Village Historical Society and a former board member of the Westlake Historical Society. He was chair of their Lilly Weston Committee and is a member of the Reuben Osborn Learning Center Steering Committee. He is also currently a Trustee of the Western Reserve Architectural Historians. He has been married to Debra for 40 years and is the father of three grown children, grandfather of six and owner of a Shih Tzu named Cammy.