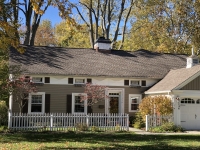 Any baby boomer knows the song “Our House” recorded by Crosby, Stills, Nash & Young about the idyllic home “with two cats in the yard” that Graham Nash and Joni Mitchell shared in the late 1960s. That song is a cultural icon that conjures up a romantic notion about home in that time period.

In a similar vein, the 1948 movie “Mr. Blandings Builds His Dream House” starring Cary Grant and Myrna Loy captures that spirit for an earlier generation. In 1948 it was the thick of the post-WWII building boom that led to suburban America and the cities of Bay Village and Westlake as we know them today and the actual baby boomers themselves. In an amazing bit of synchronicity, one day after the last Digging Dover column about Arthur Krumwiede was submitted, a gentleman contacted the Bay Historical Society asking about the location of the Bay “Blandings Dream House” that Mr. Krumwiede constructed.

A 1955 Krumwiede promotional booklet mentioned that he was picked to build the Cleveland version of the Blandings Dream House. I didn’t know what that statement meant so it was left out of the second article.

As a promotion for the movie, 73 “Blandings” homes were built nationwide. According to Krumwiede’s booklet, the construction of the homes was sponsored by General Electric and Selznick Studio (the producer of the movie).

Some of them were open for tours with proceeds to benefit local children’s charities. Four were in Ohio, two were in the Cleveland area – one in Bay and one in Lakewood. I'm not sure if the Lakewood one was also built by Krumwiede.

A microfilmed picture of that house, published in the Cleveland Press on Sept. 13, 1948, was located. The picture shows a crowd of some of the 3,500 people who viewed the house in Lakewood at 17642 Edgewater Drive. The caption says that 4,300 people viewed the Bay one and that both Cleveland area Blandings homes were open to the public for two weeks. They were open for tours in September of 1948 at the time of the premier of the movie here.

The design of the Blandings dream houses approximate the home featured in the movie. It is similar in design to many of the homes Krumwiede later constructed on Nantucket Row.

The Bay Village Blandings Dream House still stands at 246 Bradley Road. It has the characteristic massive central chimney that was both an Arthur Krumwiede and on the East Coast, architect Royal Barry Wills, “signature.”  When first built it had two bedrooms and 1.5 baths on the first floor and two bedrooms and one full bath on the second floor.

It was not only Mr. Blandings' dream house but the dream house for many Americans at the time, complete with a white picket fence. A neighbor of mine on Ellington Road was so enamored with the movie that she watched it countless times and knows all of the dialogue by heart.

In the movie, Cary Grant portrays a successful advertising executive who lives in a cramped Manhattan apartment with his wife (played by Myrna Loy), two daughters and a maid. He falls for an ad extolling the benefits of living in Connecticut. They buy a century home that turns out to be a tear down and embark on a journey of designing and building a new traditional styled home with an architect. That is the source of the humor. It is the new-home version of a “money pit.”

Arthur Krumwiede sold the home at 246 Bradley to Ellen Havighurst on Dec. 21, 1948. She is listed as Mrs. Alfred R. Havighurst in the 1952 Bay Directory. County records indicate that Ellen Havighurst sold the home to Richard Reynolds in 1954. A classified ad in the 1955 Plain Dealer lists the “famous Blandings house” in Bay for sale for $49,500 due to the owners out-of-town relocation. Other, more typical homes are listed at the same time for sale in the high “teens.”

Norman and Nancy Waggoner had five children living with them in 1968 according to the Bay Directory, the largest family that occupied it. Stephanie Allen and her family lived there the longest (21 years). Stephanie shared publicly on Facebook that she loved the house and reluctantly moved because her family outgrew it.

Hopefully for anyone living in it, it was a dream come true.

William R. Krause, AICP, retired as the Assistant Planning Director of the City of Westlake in 2020 after over 30 years with the city. He also served on the Bay Village Planning Commission for 5 years. He was a trustee for the Bay Village Historical Society from 2020 to 2021 and a former board member of the Westlake Historical Society. He was chair of their Lilly Weston Committee and was a member of the Reuben Osborn Learning Center Steering Committee. He is currently a Trustee of the Western Reserve Architectural Historians. He has been married to Debra for 40 years and is the father of three grown children, grandfather of six and owner of a Shih Tzu named Cammy.