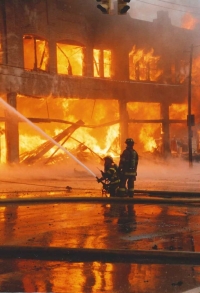 If a picture is worth a thousand words then Lt. Brian Wilker has an encyclopedia’s worth of footage depicting Greater Cleveland’s bravest first responders spanning more than three decades. Brian is uniquely in-tune to the realities of the subject matter he photographs.

He spent 31 years as a firefighter and paramedic with the City of Westlake, retiring in April 2021, and has enduring many harrowing moments similar to those he’s captured through his camera lens. His interest in photography stretches back even further.

From a relatively young age, he would tag along with his father, Clarence, who was an avid nature photographer who worked for the City of Lorain for 25 years.

It wasn’t long before he began to follow in his father’s footsteps.

With a portable police radio, Wilker was always ready to take an impromptu detour when there was word of a fire in progress within range of him and his Nikon camera. He even built himself his own dark room to develop his photos.

His photographic instincts have been greatly influenced by his experience as a firefighter/paramedic. These instincts not only helped him in setting up his photos to get the best angles, but also to ensure his own safety. During Cleveland’s infamous Worsted Mills fire on July 4, 1993, he was able to anticipate and capture the exact moment a large section of the building began to fall.

In addition to intense shots of burning buildings and firefighters battling flames with their high-pressure hoses, Wilker’s photo portfolio also includes many deeply human moments. One newspaper clipping shows paramedics hurriedly pushing a train accident victim on a gurney in hopes of saving his life. The cover photo of a 1992 edition of 9-1-1 Magazine shows two Cleveland EMS paramedics giving CPR to an unconscious boy with rosary beads around his neck.

His son, Kevin, has begun to follow in his father’s footsteps, practicing sports photography for St. Edward High School. In addition to camera equipment, Wilker also shares with his son tips and tricks he has learned over the years, as well as multiple books about photography.

He captured numerous photos featured in the Plain Dealer and multiple firefighter trade publications from the late 1980s through the end of his firefighting career. And while he may have hung up his helmet, his camera is another story – one that has more stories of its own to tell.