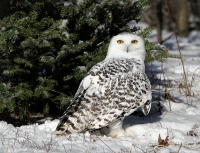 "Snowies" – snowy owls, that is – are snow white owls like Hedwig of Harry Potter fame. Their stark white color is good camouflage in the region north of the Arctic Circle they call home. But that, along with their large size (up to 27 inches tall with a 49- to 51-inch wingspan), makes them easy to see here in Northeast Ohio, especially if there is no snow on the ground.

Snowy owls move south from their arctic breeding grounds in winter. But they rarely venture as far south as the United States and then only into the most northern reaches along the U.S.-Canada border, including Northeast Ohio. This year is one of those years, called an irruption, when snowy owls are moving south and have been seen in our area.

Unlike other owls, snowy owls hunt in daylight as well as at night – after all, they come from the land of the midnight sun – and so can be spotted almost any time of day. They prefer windswept rocky coastal beaches and flat open grassy areas reminiscent of the arctic tundra they usually call home. So, in Northeast Ohio, they are most often seen on the beaches and rocky break walls along Lake Erie, open grassy areas in industrial parks and even airports.

In early December they had been seen all the way from Lorain Harbor to Mentor Headlands State Park. And in past years they have been seen at Burke Lakefront, Cleveland Hopkins International and Lorain County airports, perched on light stanchions, feeding on mice and other small varmints in the grassy strips around and between the runways. Because of their large size you don’t necessarily need binoculars to see them, but binoculars will help to see the snowies' striking, cat-like, bright yellow eyes.

To find out where they have been spotted recently in our area, go online to the eBird Snowy Owl Alert website, ebird.org/alert/summary?sid=SN40647.