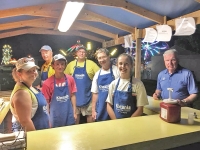 Volunteers at Bay Village Kiwanis's curly fries booth during Bay Days. Tony is on the right.

This is the last in a series of articles about one local veteran, Bay Village resident Anton (Tony) Dostal, who served as a mortician during the Vietnam War.

When Tony Dostal’s DC-8 aircraft from Vietnam touched down in Fort Lewis, Washington, on Aug. 22, 1969, there was a big roar of cheers from the couple hundred soldiers aboard when the wheels hit the runway. They were back home in the United States.

“There were three seats on either side of the aisle and we were squeezed in. It was one happy group,” Tony recalled.

Soon he was back in Cleveland and discharged from the Army within a few days. Getting back to a normal life, Tony and his wife, Judy, purchased a house in Bay Village in 10 days.

Tony resumed working as a mortician at the Corrigan funeral homes, and he and Judy began their family, having two children: Gregory, in 1970, and Beth Ann in 1972.

Tony then continued his commitment to what would become a lifetime of service, not to the military, but to his community.

“I ran for Bay Village City Council in August 1973, was elected Ward 1 representative and served as a council member for 16 years.”

Tony joined the Bay Village Kiwanis Club in 1973, becoming the Bay Days carnival chairman in 1976. Fellow Kiwanian Russ Bauknecht said of Tony: “Working with him over the years in Kiwanis with Bay Days, nothing rattled him. Problems would come, and Tony would just address them calmly and then continue on to the next thing. Speaks loudly of a quiet man.”

When his son, Gregory, joined the Boy Scouts in 1982, Tony volunteered to make the sauce for the troop’s fundraising spaghetti dinners. After the troop folded, Tony continued making the spaghetti sauce for Kiwanis fundraisers, and still does to this day. “I cook up to 120 quarts of sauce for each event, filling up seven roasters.”

Civic-mindedness is part of the Dostal  family's core, with Judy joining the P.T.A. and eventually becoming president. Of her husband, Judy said: “They say that you look for a husband like your father. My dad was a gentleman, and Tony is truly a real gentleman in every sense of the word. He is so kind to everyone.”

Both Tony and Judy are active members of St. Raphael Catholic Church, where Tony attends morning services every day.

His daughter, Beth, describes her father as her hero. "Thinking back, I can often remember my dad getting up in the middle of the night or excusing himself from family events and holidays to be there for a family in need," she said. "He was, is, and always will be truly selfless and a honorable man. It’s who he is. When my dad told me about his profession, he'd say it’s an honor to be able to care for and give the final respect to those who passed, and be there for the family in need. This mindset guided me in my life and made me the person I am today.”

Tony was honored in 2002 as Bay Village Citizen of the Year by the Bay Village Community Council, which is awarded to residents that have provided significant volunteer community service.

Tony's memories of his year in Vietnam are still vivid more than five decades later, but so are some of the physical ailments that can be traced back to the war.

“When in Vietnam, I’d go outside the barracks with cup of coffee at about 5:45 in the morning. The airport was quiet then, and the sun was coming up and it was pretty. Well, every now and then a C-130 airplane would fly real low and slow as he was spraying. I always thought they were spraying for mosquitoes, but I later found out what they were spraying was Agent Orange.”

He has since survived prostate cancer and now has Parkinson’s disease. Tony's doctors at the VA hospital have confirmed that the illnesses were caused by the toxic Agent Orange chemicals he was exposed to in Vietnam.

Tony Dostal, a husband, a father a veteran, and a volunteer is an exceptional example of a life well lived.