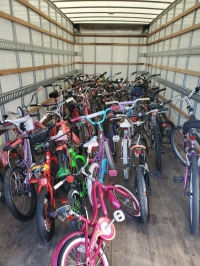 With the help of Bay Village Recreation Director Dan Enovitch and his crew, the Village Bicycle Cooperative was were able to donate 42 refurbished bicycles to the West Park Corps of the Salvation Army.

Major Ernesto, head of the Corps, said that these bicycles will be donated to needy folks throughout the Cleveland area, not just those served by the West Park Corps.

VBC donated seven more bikes to Blessed Trinity Parish that have been earmarked for a needy family on Cleveland's west side. There are an additional four bikes that are tagged for distribution to another Cleveland charity.

That will bring VBC's total of bicycles donated this calendar year to 141, surpassing our old record by a significant amount. Volunteer Dave Kett personally refurbished a majority of these bicycles. Helmets have also been donated along with these bicycles. This is the best part of VBC's Christmas.