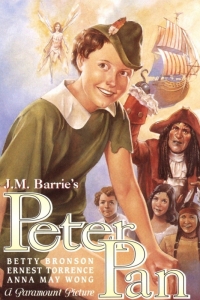 Join West Shore Unitarian Universalist Church for the classic 1924 silent film "Peter Pan," accompanied by Music Director David Blazer on the organ. Fun for all ages, you are invited to bring the kids to watch Peter, Tinker Bell, Wendy and the gang romp and fly on the big screen on Sunday, Feb. 20, at 4:00 p.m.

This is the first film adaptation of J.M. Barrie’s famous 1904 stage play directed by Herbert Brenon. The film closely follows the plot of the original play, and even goes so far as to incorporate much of its original stage dialogue in the intertitles. Added scenes include Nana the dog pouring out Michael's medicine and giving him a bath, and Nana bursting into the home at which a party is being given, to warn Mr. and Mrs. Darling that Peter Pan and the Darling children are flying around the nursery. Like the original play, and unlike the 1953 Disney film, the 1924 version makes it clear that Wendy harbors a romantic attachment to Peter, but Peter only thinks of her as his mother.

Music Director David Blazer looks forward to these creative silent movie/organ improvisations. “In addition to our restored Holtkamp organ, this time we will be using a newly donated instrument, a Zimbelstern, to add to the sound effects.” The Zimbelstern, Blazer explained, is a musical instrument which rings small bells at random as an accompaniment to organ music. “What better way to evoke the sound of Tinker Bell’s wings as she flutters on stage?” said Blazer.

This event is free and open to the public and will be held in the church sanctuary located at 20401 Hilliard Blvd. in Rocky River. Due to church covid-19 protocols, masks are required to be worn in the building by everyone ages 3 and over. For more information, call the church office at 440-333-2255.