Local D.A.R. chapter named for the 1st First Lady of the U.S.? 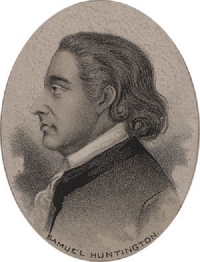 Some consider Samuel Huntington (1731-1796) to be our country's first President.

The Martha Devotion Huntington Chapter of the Daughters of the American Revolution, based here in Bay Village, was organized on Oct. 5, 1940. It was named to honor Martha Devotion, oldest daughter of Rev. Ebenezer Devotion and Martha Lathrop.

Martha Devotion was married, in 1761, to Samuel Huntington of Connecticut, who became a signer of the Declaration of Independence, Governor of Connecticut, and, in 1779, President of the 6th Continental Congress.

No children were born to Martha Huntington and her husband but they adopted two children of his brother, Rev. Joseph Huntington, who were carefully reared and educated. One of these children, Samuel Huntington, became Governor of Ohio, in 1810 and 1811. Martha Huntington died in 1794, in her 56th year and her distinguished husband, two years later, aged 65. Their remains rest side by side in the old burying ground in Norwich, Connecticut.

Why the DAR chapter's organizing committee came to choose to honor Martha is unknown. Did Martha or her husband, Samuel, even came to Ohio? Was it because her adopted son became Ohio’s 3rd governor? Or was it some other reason?

The D.A.R., founded in 1890, is a non-profit, non-political volunteer women's service organization dedicated to promoting patriotism, preserving American history, and securing America's future through better education for children. Any woman 18 years or older, regardless of race, religion or ethnic background, who can prove lineal descent from a patriot of the American Revolution is eligible to join.