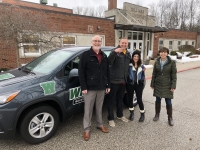 The Westlake Educational Foundation is excited to announce Matthew Eck as the winner of a new 2022 Chevy Trax, donated by Serpentini Chevrolet of Westlake for the benefit of Westlake City Schools’ students.

With the drawing scheduled for halftime of the Westlake boys’ varsity basketball game on Friday, Feb. 4, the forecast did not bode well for an in-person event. Reminiscent of the Foundation’s first car raffle drawing in February of 2021, which was impacted by Covid and a snow day, whether the 2022 drawing would be in front of a live crowd or not was becoming a game-day decision.

Heavy snow resulted in schools being closed on Thursday and Friday, meaning the basketball game may or may not be played as scheduled. The condition of the roads at mid-day would determine the game’s fate. Fortunately, the snow stopped, and the city’s crews were able to clear the roads. The basketball game was on, and the Foundation’s car raffle drawing would occur at halftime as originally planned.

Craig Catanzarite, Foundation board member, emceed the drawing. A policeman providing security at the game was invited to draw the winning ticket for the Chevy Trax grand prize.

While Matthew Eck was out of town for the weekend serving in the National Guard, he received a call from an unknown number. Later in the evening, listening to the voicemail informing him he won the vehicle, he initially thought it was someone playing a joke on him. Before getting excited about winning and informing his wife, he went online and watched the recording of the raffle drawing that had been live streamed during the game. Upon hearing his ticket number and name announced, he then realized he really had won the car.

The timing was perfect for the Eck family! They were in need of another car and had been researching different vehicles. With the new and used car markets struggling to meet demand, their search was at a standstill. Winning the Chevy Trax was a pleasant, unexpected surprise that delivered a new car to the Eck family when they needed it. Matt acknowledged, “It’s always great timing to win a car, but this was ultra-amazing timing.”

Matt, his wife Kara, and their two daughters are relatively new to Westlake, having moved from Cleveland less than 4 years ago.

"We feel very blessed to win this car," Matt said. "We feel even more blessed to live in this diverse community full of great supporting community members everywhere we go. I love the relationships my children have with other children of diverse backgrounds and the ability to learn different cultures. Connection to each other is needed now more than ever and Westlake represents what is right with our great country."

Matt and Kara’s appreciation at winning the grand prize extends beyond their sincere thank-you. They decided to pay it forward with donations to the Westlake Educational Foundation and City Year Cleveland, which benefits young people in Cleveland. “We will continue to pay it forward as long as we can,” said Matt.

The raffle presented the Foundation with the opportunity to partner with other organizations within the school district who support various aspects of Westlake student life.  By promoting the raffle, Westlake Demons Athletic Boosters, Westlake Music Boosters, Westlake PTAs, and Westlake Alumni Association shared in the ticket sales proceeds. With their involvement and support, the Foundation’s second car raffle approached almost $27,000 in ticket sales proceeds. These proceeds will help the Foundation and its partner organizations support their respective missions, ultimately enhancing the curricular and extra-curricular activities of Westlake City Schools’ students.