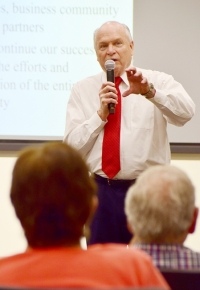 Westlake Mayor Dennis Clough presents his State of the City address to residents on May 10. Photo by Denny Wendell

Mayor Dennis Clough presented his annual State of the City address on Tuesday, May 10, to an engaged group of Westlake residents at the Community Services Center.

The presentation, sponsored by the Observer, included a rundown of the activities of each city department over the last year, along with a reasonably deep overview of the city’s financials. A trained CPA, Clough enjoys the chance to talk numbers and highlight Westlake’s strong financial standing.

As he does every year, Clough praised the city’s sizable business community, the diversity of which has become more important as the lingering effects of the pandemic alter the workforce. But he also acknowledged that the changing landscape has the city’s attention.

Many employers, including two of Westlake’s largest – Hyland and American Greetings – have seen an increase in employees working from home, thus reducing the income tax revenue the city collects.

Since 2019, the annual growth in Westlake’s income tax revenue has been less than 1 percent, an appreciable difference from the previous 15 years when growth never dipped below 4 percent per year, and sometimes was as high as 8 percent.

“These last fews years it’s been pretty, pretty flat,” Clough said. “We may have reached our peak when it comes to growth as far as our income tax revenues, so we have to be careful about it but we monitor it on a regular basis.”

It helps that Westlake is sitting on a healthy $57 million rainy day fund which, the mayor said, helps the city “ride out the ebbs and flows” of the economy and continue moving forward with planned improvements.

“It allows us to do capital projects – one-time type of things – where you can pay from the general fund and you don’t have to worry about it recurring each and every year. That’s how we’re able to do some of these improvements that need to be done.”

Visit cityofwestlake.org to view a recording of the State of the City address.