Area students excel in rowing and sailing at national level 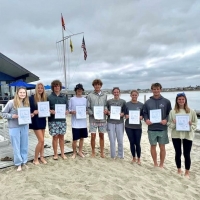 The Bay Sailing Team on the beach in San Diego at the Mallory Trophy Regatta.

The Foundry Community Rowing and Sailing Center in Cleveland provides fun, safe and accessible training for middle and high school students in the growing sports of rowing and sailing. This non-profit organization opened in 2017 and many student athletes participate year-round in these two water sports.

On June 4 and 5, the 2022 ISSA Fleet Race National Championship (Mallory Trophy) was hosted by Mission Bay Yacht Club in San Diego, California. The Bay Sailing Team, which trains with the Foundry’s High School Sailing Team, qualified and traveled to California to compete in this high school level regatta.

June 4 began with overcast skies, moderate temperatures, and a variable WSW breeze averaging about 7 knots. Winds were up and down throughout the day.  The regatta completed 26 races on Saturday. Sunday, June 5, featured warmer temperatures in the mid-60s and clear, sunny skies with winds about 9 knots and steadily WSW. Over the two days of competition there were 40 races completed.

These athletes are members of the Cleveland Foundry Juniors (CFJ), a club team comprised of student athletes from a variety of schools within Cleveland and the surrounding suburbs. They train and compete at the Foundry during both the fall and spring rowing seasons. Did you know that one of the largest sources of Division I and Division II college scholarships are given to high school women rowers? The sport is growing in popularity here in Northeast Ohio.

The Foundry CFJ rowers had intense competition from a host of great rowing programs from across the country. Coached by Connor Sawyers and Matt Houser, the womens team finished in 22nd place in the U17 4x category. This team consisted of Avery Douglas from Westlake High, Nola Foote from Fairview High, Anna Lee from Hathaway Brown, and Anneliese Larsen from Bay High. On the men's side, the team also finished in 22nd place overall under the U17 2x category. The athletes representing CFJ were L. J. Justus from Lakewood High and Reed Livingston from Chagrin Falls High.