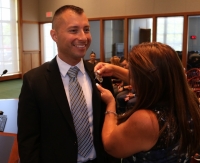 Ptl. Alejandro Giraldo has his new badge pinned on by a family member at Westlake City Hall.

Three new patrolmen officially joined the Westlake Police Department on Tuesday, June 28. Alejandro Giraldo, Giovanni Santiago and Steve Barnie took the oath of office administered by Mayor Dennis Clough in the Michael Killeen Council Chambers at Westlake City Hall. The new officers each come to the City of Westlake having established excellent reputations during their time in their previous roles.

Prior to the oaths of office, Westlake Police Chief Kevin Bielozer described for the attendees the meticulous and rigorous screening process the department uses when considering new hires.

“Everybody that’s about to be sworn in this morning has done an exceptional job at every step of that process,” Chief Bielozer said. “So we have every bit of confidence as we welcome them aboard onto the team here at the Westlake Police Department. We are really serious not just about excellent teamwork and service, but training and continually refining our abilities as police officers.”

Ptl. Giraldo served on the Ohio State Highway Patrol for the last five years. During that time, he specialized in criminal patrol interdiction, crash investigation, OVI investigation and traffic enforcement. Born in Colombia, Ptl. Giraldo moved to Cleveland at the age of 4 and grew up in Fairview Park with his parents and two younger brothers. He graduated from Bowling Green State University with a degree in criminal justice.

Ptl. Santiago has been a police officer for eight years, including six with the Cleveland Division of Police. He previously worked as a detective, investigating misdemeanor, felony and violent crime cases. Through his sharp attention to detail and work ethic, he successfully closed more than 190 cases. He was born in Puerto Rico and is fluent in Spanish and English, which he has utilized to bridge the gap between the police and the community.

Ptl. Barnie began his law enforcement career five years ago with the City of Fairview Park where he was a member of the WEB Hazardous Devices Unit. He served 10 years in the U.S. Army as an Explosive Ordnance Disposal (EOD) Technician and participated in three combat deployments in Iraq. He also worked as an instructor at the U.S. Navy EOD School in Florida for two years.