Westlake's 'Music Man' to be honored with musical tribute 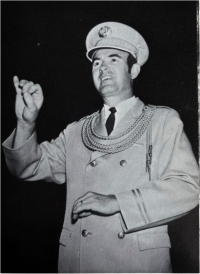 I have had the pleasure to write about many of the early Dover/Westlake families and individuals that helped to make our town the wonderful city it is today. The early settlers paved the way for this to happen but there have been many others in more recent years that have done so much for our city and its residents.

Tom and his family lived in Bay Village where he attended the Bay schools and graduated from Bay High School in 1946. Tom was an outstanding trumpet player and was the 1st chair trumpet player while in high school. He grew up in a home surrounded by music. His mother played piano and violin and his father had studied piano. Tom’s three brothers and a sister all developed a love for music but Tom was intrigued by all aspects of music.

Tom started his music career at the age of 8 when he began playing the bugle in a junior drum and bugle corps. Tom also served in the U.S. Army following graduation and was a member of the infantry in Italy and then auditioned for a position as a trumpeter in the 98th Army Band. For the last 8 months of his service he was stationed in several cities during the occupation forces in Italy after the end of WWII.

Tom graduated from Ohio University in 1952 with a major in trumpet and a Music Education degree. He continued his studies at OU and earned his Master's Degree in Music Education in 1953. Tom was an accomplished trumpet and French horn player with an outstanding tenor voice. Before being hired in Westlake in 1954 Tom taught one year in Mansfield.

When Mr. Hill arrived in Westlake he took over the entire band program. At that time Westlake only had music classes in two buildings. By 1966, a new high school had been constructed and Tom was in charge of all the bands from 1966 until 1973 and all the choirs at the high school from 1968 until 1987. He was also coordinator of the entire music department and at the high school he was conducting two bands, 3 choirs, and teaching music theory, conducting and humanities!

In 1955, Tom was instrumental in organizing the “Westlake Band Boosters.” In 1962 the name was changed to "Westlake Schools’ Music Boosters" to incorporate all the music groups – bands, orchestras and choral groups.

In 1955, a parent, Andy Dorko, worked diligently with Mr. Hill to launch the group and the promotion of music throughout the community began! Their first big program began in 1956 with an outdoor festival of music. This event was to be held at Reed Field (currently behind DIS) on the third Saturday in May. It was called an “Old Fashioned Ice Cream Social!”

The Boosters built a bandstand decorated in red, white and blue and the audience sat in the bleachers. The Boosters, along with Mr. Hill, all dressed up in clothes worn in the 1890s. Unfortunately, this day, as would many in the years to come, began with temperatures in the 40s and ice cream was not in demand. The next year the day was scheduled again and it was raining. It happened again in the third year and the program was moved inside.

At this point Westlake only had two elementary schools and a combined junior and senior high so moving indoors was not a huge issue. Only the bands were part of these early days. In 1959 a carnival type atmosphere was added to the festival with booths and games … and the weather was beautiful! Choirs were also featured this year. But upon evaluating the event it was felt the carnival atmosphere took away from the band performances so the carnival format was eliminated.

The event had moved between Hilliard School and Dover School for the first several years. By 1962, the "Music a la Mode," so named by Mr. Hill, was moved to the new high school. But the unlucky rain on the day foiled the outdoor lawn chair concert. From 1963 on, the program moved inside and was held in the gymnasium.

The program continued to grow: good music, large audiences, ice cream and delicious cakes donated by the parents. The program concluded with a grand finale combining the high school band and choirs performing the “Battle Hymn of the Republic” and a special performance of the 1812 Overture with simulated cannons and bells. Quite the finale! In the 1980s, jazz bands and a show choir named Company D was added. His programs always concluded with his wonderful choirs singing “The Lord Bless You and Keep You.”

In 1987, the year Mr. Hill retired, he was honored by his former students at the 32nd Music a la Mode. Alumni from both the bands and the choirs from the classes of 1957 through 1986 attended, coming from as far away as California and Florida. Mr. Hill received many awards that night. He was presented with the “outstanding band member award” which was named in his honor, a $1,000 Bach trumpet was presented to the high school to be used by the 1st chair high school trumpet player and a scholarship was awarded in his name.

Retirement did not slow Tom down. He continued to share his love of music and teaching. He was the conductor of the Bay Village Community Band and he personally invited many of his former students to join the band. He was also a member of the Elyria Symphony Orchestra, the Westshore Chorus, the Fairview Civic Chorus,  the Lakewood Symphonic Band and the Westlake Christian Church Choir. Following his retirement from the Westlake schools he also taught at St Mary School in Avon and Messiah Lutheran School in Fairview Park. Tom was also active in the Bay Men's Club and he was an elder at his church.

Mr. Hill was also inducted into the Westlake High School Hall of Fame Honorary Class of 1995 by the Dover/Westlake Alumni Association. His plaque is currently on display at the high school's Hall of Fame hallway.

Mr. Tom Hill taught so much more than music. He was an educator who taught Commitment, Dedication, Pride, and that his students should live by their Actions and strive for Greatness. He was a teacher, and an organizer. He stood for musical excellence, achieving high standards, honesty and integrity, loyalty and love. Many of his students can look back and recall the lifelong lessons he taught us. All were blessed who knew him.

Sadly, Mr. Hill passed away last December. Since that time, a committee was formed and it was suggested that something very special needed to be done to honor Mr. Hill. The Westlake High School music faculty, along with WHS graduates Rock and Carey Whitehouse, Kevan and

Patty Stuber, Mary Beth Schneidler and Sharon Dixon, have worked together to support commissioning a new combined band and choir composition to create this memorial to honor Mr. Hill’s legacy of quality and dedication to his students, the community and our country.The piece will premiere at the 2023 Music a la Mode. Our composer will be Major Ryan Nowlin, USMC, assistant director of “The President’s Own Band” in Washington, D.C. Major Nowlin attended North Royalton High School and was the band director at Brecksville-Broadview Heights High School before joining the Marine Corps. Current students will have a once-in-a-lifetime opportunity to work directly with a composer of Major Nolan’s stature.