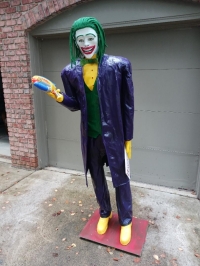 The Joker, Batman's arch enemy, has joined Mel Maurer's annual display of his homemade superheroes and cartoon characters at 1988 Sperry's Forge Trail in Westlake. Visitors and photos are welcomed.

Mel Maurer is a retired Manager of Information Technology. In retirement, he has pursued his passion for writing, speaking  and American History - focusing on The Civil War with special emphasis on Abraham Lincoln. He is a member, past president, and past Historian of the Cleveland Civil War Roundtable and Lifetime member of The Lincoln Forum; a member of the Association of Lincoln Presenter (ALP); a former member of the Titanic Historic Society; a member of the National MS Society’s Volunteer Hall of Fame and a Presenter for the Institute in Learning in Retirement (ILR). As a speaker, he writes and speaks on a variety of topics including the Civil War, Abraham Lincoln, The Titanic, and performs in one man shows as President Lincoln, Archibald Grace IV (Titanic survivor), Teddy Roosevelt, Wyatt Earp, Ernest Hemingway, and Clint Hill (Secret Service Agent for Jackie Kennedy).