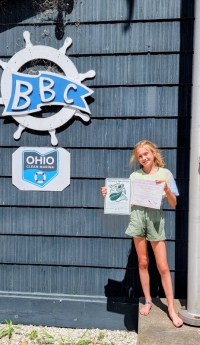 Elizabeth Moody is pictured at Bay Boat Club with the Monarch Waystation registration.

As the fall migration of monarch butterflies comes to a close you may have heard that monarch butterflies have been placed on the endangered species list by the International Union for Conservation of Nature (IUCN). The Union has placed it on their Red List of Threatened Species as they found the population of the monarchs east of the Rockies shrunk by 84% between 1996 and 2014 and continues to decline.

“It is difficult to watch monarch butterflies and their extraordinary migration teeter on the edge of collapse,” said Anna Walker, Species Survival Officer at the New Mexico BioPark Society, who led the monarch butterfly assessment. The Greater Cleveland area is a crucial point in the monarchs' migration path from Canada to Mexico in late summer. After traveling close to 30 miles over the open waters of Lake Erie, our community is the first chance the monarchs get to rest, recuperate, mate, and lay eggs.

We are a team of sixth-graders who are planning strategies to impact monarch conservation locally. First, we educated ourselves on the monarch's lifecycle and care by raising 25 butterflies from eggs, testing them for disease, and releasing them.

Second, we plan to be advocates and share our concerns with school and community groups. We have helped establish six new Monarch Waystations, three of which have been officially registered, including the one at Bay Boat Club. Letters have been written to Mayors Koomar and Clough to encourage them to join the National Wildlife Federation’s Mayors’ Monarch Pledge which commits them to providing habitats for the monarch butterfly and pollinators, and to educate residents about how they can make a difference.

Third, we are participating in the Symbolic Migration Project. We decorate paper butterflies that are then sent to schools in Central Mexico where the monarchs spend their winter. The goal of this project is to build bridges of communication and pledges to protect the monarchs and their extraordinary migration.

All of us can take many steps to help ensure that this beautiful pollinator does not become extinct. A step toward that goal would be the planting of common milkweed. Milkweed is the only plant upon which the monarch lays its egg, and upon which the caterpillar when hatched feeds. Every garden should have a milkweed plant easily visible to the female monarchs. Once the butterfly emerges from the chrysalis it needs to feed on nectar so be sure to have flowers that the monarchs can pollinate. Ideally, the plants need to have flowers packed with pollen like Zinnia, Cosmos, Ava flowers, Salvia, and of course, the Butterfly Bush.

Our team, sponsored by Bay Sea Scouts, are entering our project in the eCyberMission STEM competition sponsored by the U.S. Army Education Outreach Program.