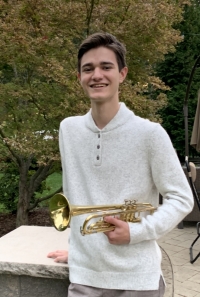 Bay High senior Adam Ward has been selected to play in the All-State Jazz Ensemble for the second year in a row.

Bay High School trumpet player Adam Ward was again selected for the Ohio Music Education Association’s All-State Jazz Ensemble. Ward, a high school senior, auditioned alongside top high school musicians from all over the state. This is the second year in a row he was chosen.

This year’s All-State Jazz Ensemble will rehearse in January, and then play a concert at the Ohio Music Education Association (OMEA) Convention, which takes place in Columbus this year, Feb. 2-4, 2023.

“Only five trumpet players were selected for this throughout the state, so this is exciting,” said Darren Allen, Bay High School Band Director.

Karen Misciagna is the director of communications for Bay Village Schools.