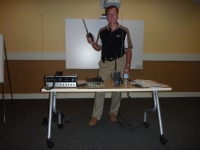 Jim Kettren displays the handheld CB radio he recommends for home use at a July 30 seminar.

After holding the emergency communications seminar on July 30, I realize that there are some “perceptions” that I need to adjust, so that residents understand just what it is I am trying to accomplish with this CB radio group, BayComm. First of all, I would like to thank those that did attend, but the attendance was very light.

After listening to some of the questions and concerns from residents, the one thing that comes to mind is that many people think of this as being strictly a “radio club,” and something that will take time and effort to participate in. I realize that the majority of people are not familiar with “citizens band radio” and therefore think “this probably isn’t for me.”

So, instead I would like everyone to think of BayComm as being a “lifeline,” at a time when your cell phone, the internet, TV, and all other forms of communications fail. Think about what just happened in India – 600 million people were without power for a day, because the grid failed. That’s more than twice the population of the U.S.!

Imagine having no way of knowing what’s going on. For example, what caused the power outage, and how long will it be out? Now, think about a hand-held two-way radio replacing your phone; being the only thing that you have to communicate with your family, neighbors and other residents in the community. By having a network of communications, the panic is reduced, and gives everyone more of a peace of mind that everything is going to be OK.

That’s the Plan B infrastructure that I want to create.

All members have to do is buy a hand-held CB radio for their home, which also converts to use while driving in the car. I have researched the best one for that purpose, and I will recommend this particular model to anyone interested. Once you have it, you can start talking to other members around the community, on a casual basis, and on one selected channel.

The idea of the club is to feel comfortable with using the radio, get to know who the other people are that are doing the same thing that you are, and attend monthly meetings to talk about procedures that might save your life, in a time of crisis.

Members and their families can stay in touch at any time over the CB, just by saying, “BayComm 11 base to BayComm 11 mobile”, for example. When the power goes out, and we all know that it does, that peace of mind of being able to get ahold of your family members plays a big part in being prepared for anything that is thrown at us.

I have the background and experience to run BayComm in a very effective manner. My goal is to get at least 25-50 households on board. Whether you live in Bay, or in a surrounding community, all are welcome to join. If you email me at jim.kettren@hyland.com, I will send you an application for membership to BayComm. Once I receive it back, I will talk to you personally, and make sure that this is a good fit for you. I will also suggest to you which radio to buy. Being prepared means to take precautions prior to an emergency. I encourage anyone who believes in preparedness to contact me.