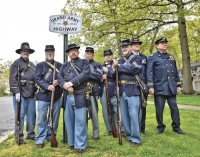 Members of the 29th Ohio Volunteer Infantry stand in front of a Grand Army of the Republic Highway sign at the western Lake Road entrance to Bay Village. The Sons of Union Veterans of the Civil War hosted a ceremonial unveiling of the sign on May 21. Photo by Denny Wendell

In April 1934, the Sons of Union Veterans of the Civil War began promoting the idea of designating U.S. Route 6 as the Grand Army of the Republic Highway to honor Union forces that served during the war between the states. This notion was originally spurred by U.S. Army Major William L. Anderson as a means of honoring Civil War-era Union fighting personnel.

The Grand Army of the Republic was, in its time, a very influential veterans group formed by members of Union forces who had served in the Civil War after the end of the conflict. The Sons of Union Veterans of the Civil War is a successor to that group, consisting of those who can directly trace a blood relative as one who had served in the Union forces.

As they are actually responsible for the roadway, each state that U.S. Route 6 runs through had to individually approve the additional naming of the highway. Beginning with Massachusetts in 1937, each state traversed by U.S. Route 6 eventually cleared the way for the for the honorary naming, and a formal dedication of the Grand Army of the Republic Highway took place on May 3, 1953, in Long Beach, California.

U.S. Route 6 was originally laid out in 1927 and at that time only extended from Provincetown, Massachusetts, to Erie, Pennsylvania. In June 1931 approval was given to extend U.S. Route 6 out to Greeley, Colorado, in the process assigning it to run along Lake Road in Bay Village. In 1937 U.S. Route 6 was once again extended, this time all the way out to Long Beach, California, making it a coast-to-coast highway as well as the longest federal route in the country at 3,652 miles.

Unfortunately, in 1963 the State of California determined, in order to comply with their road regulations, the configuration of U.S. Route 6 had to be modified in a manner that made the highway end in the town of Bishop, reducing its overall mileage to 3,227 and relegating it to the second-longest federal highway in the country (as well as eliminating it as a true coast-to-coast highway).

If U.S. Route 6 was demoted to second-longest federal highway which route, then, took over the top spot? All one has to do is travel south to Westlake to find it.

Following Center Ridge Road in Westlake, U.S. Route 20 has the distinction of being the longest federal highway in the country, covering 3,365 miles.

U.S. Route 20 was laid out in 1925 and originally intended to extend from Boston, Massachusetts, to Astoria, Oregon, which would have made it a coast-to-coast highway.

Early on, a number of factors contributed to the highway extending west only to the eastern entrance of Yellowstone National Park, rather than all the way to the west coast, at the time covering only  2,542 miles.

In 1940 approval was given to extend U.S. Route 20 to Albany, Oregon and sometime after that to finally run it all the way to the Pacific coast, terminating at Newport, Oregon, and providing its current longest road mileage.

Having resided in both municipalities I’m aware of the cities of Bay Village and Westlake tending to share in friendly rivalries. Until researching this story I had no idea that extended to either city, at one time or another, being able to claim having the country's longest highway run through its corporate limits, however.