Rising star is 'easy to love' 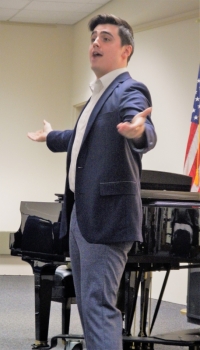 Baldwin Wallace student Dan Hoy sings "If Ever I Would Leave You" during the Westlake Westshore Arts Council's "Catch a Rising Star" program at Porter Library. Photo by Louise Seeholzer

When Dan Hoy performs he wraps his talented and natural performance with a genuine love for the music and presents it to his audience with obvious affection. The audience at Westlake Porter Public Library on Feb. 21 caught Hoy’s bouquet of talent and enthusiasm from his first note and responded with rapt attention and wholehearted applause.

Hoy was featured in the “Catch a Rising Star: Baldwin Wallace Music Theater in Recital,” a program that has been sponsored by the Westlake-Westshore Arts Council for the past five years. A third-year student in the prestigious BW Music Theatre, Hoy has an impressive performance record, which he validated to his audience.

From Hoy’s opening number, Sondheim’s "All I Need Is the Girl," an enjoyable evening was promised. His phrasing and interpretation of "If Ever I Would Leave You" by Rodgers & Hammerstein was excellent. He sang "Maria" from "West Side Story" with great feeling and Porter’s "Easy to Love" with a smooth ease. His rendition of "Why God, Why?" from "Miss Saigon" was terrific. Hoy’s program included varying tempos including "Jailhouse Rock," one of Elvis’s signature hits, which spotlighted the abilities of Alyssa Thompson, his talented piano accompanist. Thompson is a BW senior studying music direction in the Music Theatre program.

In addition to singing the compositions of noted composers, Hoy offered tidbits of information on the composers and/or their works in his introductions. His ease at relating the material revealed his personal interest and admiration of the composers and their songs.

WWAC member and BW alum, Paula Mealey, takes great pleasure in facilitating the BW “Catch A Rising Star” program. In introducing the performer and his accompanist, she promised the audience they would have a chance to question Hoy and Thompson about their studies, their aspirations and more after the program. And the interest inspired by the program and the talented performers generated many questions.

In keeping with its mission to provide the community with an enhanced and broadened cultural life that will promote awareness, education and involvement in the arts, the WWAC offers the “Catch a Rising Star” program free to the community.