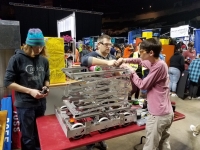 Robotics, the technology of designing, constructing and programming robots to do automated tasks, is a growing field. The Bay High School Robotics Club, in its second year, is also growing and aiming to compete with some of the top high school robotics clubs in the area.

“Building robots to solve the challenge of a rigorous competition is just the best learning experience on so many levels,” said Michael Clifford, Bay High science teacher and the club’s advisor. “It is a goal of the school to prepare students for a world of technology, and the FIRST Robotics Competition is as technical as it gets for high school students. Last year was our rookie experience with FIRST Robotics, and we made some mistakes. But we learned a lot that will help us this time around.”

The competition project is to build a robot that will compete in a very complex game. Each year, the game and its objectives are announced during the kick-off in January, at which time every team in the country begins building their robots.

“Last year, the game’s theme was Power Up, based on '90s-type video games like Mario,” said Clifford. “The robot had to pick up boxes, defeat the boss, things like that. There were multiple ways to score, such as placing boxes on high or low scales and having the robot climb. It was a very complex game and a lot of strategy required team members to have strong communication.”

Clifford said that while the club lost two of its strongest seniors from last year, it has grown from 13 students to 22 students this year. Members meet once a week during the “off season,” but meet five days a week during the “build” season, building the competition robot once the specifications are released.

“Students learn and practice the skills that real engineers use – problem solving, teamwork, time management, using power tools, mechanical design and computer programming. But business and marketing skills are also needed to raise the money for the materials and fees. It is a very realistic experience that you’d find in the engineering world, the programming world, and the marketing and business world.”

The Bay High team ranked a respectable 33rd out of 55 teams last year, but only the top 24 teams qualify for the final tournament, whose winner is invited to the national competition. The Buckeye FIRST Robotics Competition is held the last weekend in March at the Cleveland State Wolstein Center, and Clifford is optimistic that Bay High’s team is strong and will do even better this year.

The competition is more expensive than some, but Clifford notes that it is a national-level competition offering a high-quality competition that gives students an experience like no other.

“We are very thankful for grant we’ve received from the Bay Village Education Foundation and from the Argosy Foundation, as well as funding from our local sponsors,” he said.

Students have raised money through a variety of fundraisers, including bake sales, raffles and a Spooky Halloween Science Lab.

Anyone interested in becoming a sponsor as the club continues to raise needed competition funds, for this year and next, can contact Michael Clifford at Michael.Clifford@bayschoolsohio.org.