Koomar recaps 2018, looks ahead to busy year in annual speech 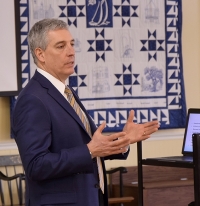 For Bay Village Mayor Paul Koomar, 2017 was spent transitioning to the office after being appointed by his peers on City Council and then running for election to a full term; 2018 was a year for defining a path forward. Koomar shared his vision, as well as the progress that has been made, with residents in his annual State of the City address Feb. 27 at the Dwyer Center.

On an administrative level, the year was marked by restructuring in almost every department, the most significant likely being the law and building departments. Mark Barbour replaced longtime law director Gary Ebert in June. Much of 2018 was spent preparing to bring the building department back in-house, after it was outsourced to SAFEbuilt in 2013.

“I think [SAFEbuilt] worked well enough for building permits and some other items,” Koomar said. “But from my viewpoint, for other internal city projects and property-maintenance type of issues, to have an employee-led department as we do with other departments really was going to add value to the residents.”

After eight years of belt-tightening following the economic downturn, the city’s General Reserve fund (aka the emergency fund) has been restored to $2 million. In 2000, at the height of the recession, that fund had been drained to 46 cents, Koomar said. The fund now holds two months of operating income to finance the city’s core operations, should it be needed.

Mayor Koomar has encouraged his department heads to seek external grant funding, and has a project manager, Kathryn Kerber, leading the effort. In 2018, the city was awarded more than $1.3 million in grants for infrastructure and safety initiatives.

“We were very pleased with that number. I don’t know if we can get that every year,” Koomar said about the grant total in 2018, which included some big-ticket items. “If we would have gotten half of that I would have been very happy.”

Nearly three-quarters of those funds were for improvements in Cahoon Memorial Park and the creek basin, the Ashton Lane bridge and new breathing tanks for firefighters.

Koomar provided updates on the two projects he said he is asked about the most: the library and the Liberty Development townhomes. The library’s architects are preparing for a pre-submission meeting with the city’s Planning Commission in April. The date of that public meeting will be posted on the city’s website. The townhome project was delayed when Liberty was required by the EPA to do additional remediation to the former Shell gas station site to prepare it for residential use. The developers are getting ready to move to the next stage in the process.

Those projects alone – not to mention the new Lake Road bridge over Cahoon Creek and revamped trails throughout the park – will bring an exceptional level of activity to Bay Village in 2019. The bridgework is slated to begin this spring and last several months. Other major road projects coming this year are the replacement of the Queenswood Drive bridge and the Columbia Road culvert.