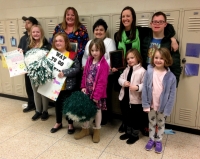 Three Westlake City Schools’ staff members were recognized with Staff Excellence awards at the Nov. 25 Board of Education meeting.

Keane’s attitude and commitment to her work are described as “immeasurable” by her colleagues.

“Laura chooses to use positive words and helps students understand if they have made a mistake while maintaining the children’s integrity and sense of self-worth,” one colleague wrote in a nomination letter. “She goes above and beyond to take care of those around her.”

Another colleague wrote that Keane is a “great example of kindness, compassion and rule following rolled into one.”

Nominations of Kane and McGlynn talked of their respect, compassion, kindness and concern for students.

The two are co-advisors for Project Support at the high school, a club that matches peers with students with special needs to provide opportunities to be part of the school community. Club members attend football games, participate in the high school’s Halloween Fun Night and bowling trips, and attend school plays and musicals.

“Students can feel a sense of accomplishment when they go to work or do classroom activities,” a nomination read. “They have pride in their finished work when they are done.”

Their names will be inscribed on a plaque that hangs at the Board of Education office. Honorees must have worked in the district for at least four years and be nominated by at least two colleagues and endorsed by the individual’s supervisor.