Archaic relics found in or near Dover 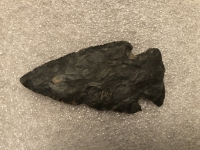 Early Archaic 2.75-inch-long projectile point from the Pease collection, circa 6,000 to 8,000 B.C. Courtesy of Chris Kitchens, photo by Will Krause

The glaciation 25,000 to 50,000 years ago brought granite boulders from Northern Canada to Dover. It is the same glaciation that many scientists believe eventually brought the first humans to the Americas over a land bridge from Siberia.

It is between 16,000 and 13,000 years ago that archaeologists agree there was widespread habitation of the Americas by humans. Dr. Brian G. Redmond, Curator of Archaeology at the Cleveland Museum of Natural History (CMNH) states that the first human inhabitants who stepped into the ecological mosaic of northern Ohio were here more than 10,000 years before French Europeans first ventured into the area in the 1600s.

“Ohio Archaeology,” a book written in 2005 by Dr. Bradley L. Lepper, Curator of Archaeology for the Ohio Historical Society (now Ohio History Connection), is an excellent source for understanding the topic. It explains that what are called Paleoindians occupied northeast Ohio from about 13,000 to 11,000 years ago. At that time the area was primarily a spruce boreal forest similar to parts of Alaska today and these first Native Americans, in small nomadic hunting bands, pursued caribou and possibly mammoth and mastodon across vast distances.

Because ancient lakes covered much or all of Dover Township until 12,700 years ago there is little chance for archaeological evidence to exist from the period before the water levels receded, even if it was visited or inhabited. But later, less substantial fluctuations in lake levels would not have made much difference to the bulk of the land in Dover, and its artifacts, due to the high shale cliffs in Bay Village.

As a result, the oldest artifacts that can be found in Dover are artifacts left by the next group, the Early Archaic hunter and gatherer Indians who lived in the area from about 10,000 to 8,000 years ago. Dr. David Brose, who once held the same position as Dr. Redmond at CMNH, stated in the Encyclopedia of Cleveland History that Early Archaic tools have been found at springs near the headwaters of Cahoon Creek and that a major Early Archaic campsite existed where Hilliard Boulevard now crosses the Rocky River.

One tantalizing relic that I heard about but have never seen was a stone mortar that was found in a charcoal laden site along Cahoon Creek, uncovered when the former Zipp’s Manufacturing site was being cleared for the Cahoon Ledges cluster development in Bay Village. This is near West Oviatt and Cahoon roads behind the Dover Junction shopping center.

It is amazing that this relic in situ was not found until just about 15 years ago. The man who found it told me about it at a Bay Village antique show. He said that he had the tool examined at CMNH and they said it could be as much as either 8,000 or 10,000 years old (I can’t remember which). If he happens to read this article it would be great if he could send me a picture of it and describe how and where he discovered it in greater detail.

It was during the early Archaic Period that the climate here started to become more like it is today. The oak and hickory trees that are now ubiquitous in Bay Village and northern Westlake first became established during the Archaic Period. The mortar was probably used to grind acorns and hickory nuts for food in seasonal encampments in the area.

Dr. Redmond said these mortar and pestle tools became common about 7,000 years ago. These tools show that native peoples were becoming more dependent on gathering wild plant foods such as these. Because they were heavy to transport they were probably left in the groves of nut trees for use in subsequent years.

The Pease family, early residents of Dover, amassed a substantial collection of Archaic lithics from the area around Cahoon Creek in Westlake, probably around Dover Center and Center Ridge Road where they lived and worked. A lithic is a stone tool such as a grinder, scraper, drill, spear point, celt or projectile point. The Pease collection was inherited by lifelong Westlake resident Chris Kitchens who had them evaluated recently by Dr. Redmond at CMNH. He stated that most of the collection is Early Archaic though at least one item is about 4,000 years old, making it Late Archaic.

Dr. Redmond also examined a stone celt that lifelong Westlake resident Dina Bluemel gave to me for the Westlake Historical Society collection, and determined that it was most likely Early Archaic. Dina’s father Richard Forthofer, discovered the heavy 6.5-inch-long artifact when he was a boy, near where he grew up at 2775 Nagel Road (near Cherry Street across from Holy Trinity Church) in Avon.

Dr. Redmond surmised that the beveled blade on the celt, which fits comfortably in one’s hand, was used to separate bark from wood, with an arm movement similar to planing wood. This tool may have been a companion to the distinctive grooved stone ax of the period which was probably used for the construction of wood framed dwellings and dugout canoes during this time. It is thought that Early Archaic hunters and gatherers lived in small shelters built with wooden frames and covered with tree bark, hides or woven mats. This is so that they could move seasonally to be close to whatever food resources were available.