Home of the Rockets breaks ground 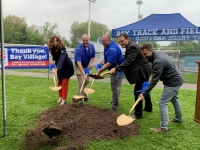 Despite a pandemic and without a large corporate sponsor, Home of the Rockets (HOTR) recently became a reality after a year of fundraising efforts led by chairperson Jon Ransom, with the support of Jay Sharpnak, Bob Reed and the entire Bay Rockets Association.

The $1.6 million capital campaign dedicated to building a 4,000-square-foot, multifunctional building and fan plaza at the south end of Bay High Stadium broke ground on May 3 and will include: home and visitor team rooms; coaches rooms; concession stand and storage area; spiritwear shop; fan plaza; restrooms; and additional storage and mechanical rooms.

Ransom said the community rallied together with hundreds of donations in all sizes, with the majority of the funds raised coming from local families, civic groups and small businesses, with special gratitude to Bay Village Kiwanis, Bay Alumni Foundation, Bay Soccer Club, and Amy and Tom Huntley.

"This project is a triumph for our community and the spirit of One Rocket Nation,” Ransom said. “Thanks to this outpouring of generosity, our new facility will enhance the stadium experience for future Bay student-athletes and spectators for decades to come."

HOTR by the Numbers: