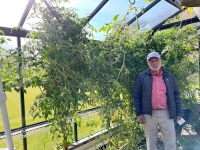 A sprawling tomato plant lives in the Concord Reserve greenhouse. Its spread dominates one entire wall. Imagine Audrey from “Little Shop of Horrors” – only this plant doesn’t eat people, it feeds them.  Here’s the backstory for the extraordinary plant that Concord Reserve resident Bob Thompson decided to name Cecile.

When Bob and his wife, Della, moved to Concord Reserve Independent Living back in 2020, it didn’t take Bob long to spot the greenhouse. With a little attention and some new shelves, the greenhouse was opened for residents to house and protect their delicate plants over the winter.

Working on this success, Bob, along with the help of Events & Programs Coordinator Karen, came up with another plan for the greenhouse. A committee was formed to attempt fundraising for the Concord Reserve Foundation by raising and selling seedlings from scratch.

Concord Reserve is owned and managed by not-for-profit Life Enriching Communities based in Cincinnati. The Foundation supports pastoral care, a benevolent fund which allows residents to stay even if they run out of personal funds, and an employee assistance fund.

First, the committee needed seeds. One of the ad hoc greenhouse committee’s volunteers donated a scramble of seed packets. The mixture of 648 tomato, cucumber and pepper seeds were potted and tended. Of those seeds, 85% germinated. The seedlings – mostly yellow cherry and red globe tomatoes – were placed in pots and offered for sale to the community last spring. But one seed escaped! It dropped behind one of the shelves and landed in fertile soil at the base of the greenhouse wall. Unnoticed, it began to grow.

One day, Bob spotted the vagabond plant climbing up the south wall of the greenhouse. He decided to just let it be and see what happened. That plant grew and thrived and grew and thrived. It began producing yellow cherry tomatoes. As you can see from the photo, it is indeed a large plant – 14.5 feet wide and 8 feet tall! As of Christmas day, Cecile was still producing tomatoes and Bob expects to harvest them well into the new year.

Meanwhile, work goes on in the greenhouse. Early mistakes in what to grow and when to plant were noted and adjusted. Plans began for improved production and sales efforts for 2022. It was decided that production will be limited to tomato and pepper plants. The first planting begins this April and the committee is anticipating a banner year.

No guarantee that one of the plants you buy will grow to this size, but under the care of the Concord Reserve residents, they will certainly be healthy plants!

Watch for more details about the Concord Reserve plant sale later this spring.