The Biggest Week in American Birding 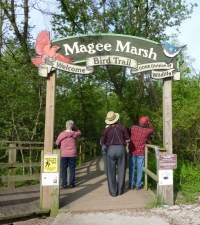 Boardwalk at Magee Marsh, warbler capital of the world. Photo by Maryann Fitzmaurice

Spring has finally sprung. And it brings not only warmer weather and flowering trees but migrating songbirds.

In fact, The Biggest Week in American Birding is coming up May 6-15. It's a birding festival held every year during peak songbird migration at Magee Marsh, a 2,202-acre marshland managed by the Ohio Division of Wildlife about 90 miles west on the shore of Lake Erie. The festival features guided birding fieldtrips, talks on birding and bird identification, and fun activities like the birder’s marketplace, bird tattoo contest and birder prom. Visit biggestweekinamericanbirding.com to learn more.

But the big draw is the birds! Spring migrations bring thousands of brightly colored, gregarious songbirds to the terminal woodlands along the shore of Lake Erie, where they rest and feed up before making the long flight across the lake. The big spring songbird prize is warblers, and Magee Marsh is known as the warbler capital of the world. It has a 1.2-mile-long handicap accessible boardwalk to which birders from all over the world come during the biggest week. It can be crowded and sound a bit like the United Nations during the biggest week. But there are other excellent birding sites nearby, such as the Ottawa National Wildlife Refuge, Metzger Marsh and Howard Marsh Metropark, if you want to avoid the crowds.

Good news. There is also excellent birding closer to home during the biggest week, and all of May for that matter. And migrating songbirds like Baltimore orioles, hummingbirds and even warblers, have already started to show up here at backyard birdfeeders and in local parks.

One excellent local birding site is Huntington Reservation right here in Bay Village. Over 200 species of birds have been spotted at Huntington, including many migrating songbirds with fascinating names like vireos, kinglets, gnatcatchers, grosbeaks and nuthatches as well as 30 species of warblers. Although you may well see warblers and other migrating songbirds along the lakefront at Huntington, you may have better luck on the Hemlock Loop, Porter Creek, Rabbit and aptly named Songbird Loop hiking trails. Other familiar local birding spots are Rocky River Park and the Rocky River Reservation, particularly the Nature Center feeders and trails.

Less familiar may be Wendy Park Cleveland Metropark, a tiny but mighty 22-acre gem on the near west-side lakefront with a view of downtown Cleveland. Over 260 species of birds have been spotted there, in a small woodlot sandwiched between Lake Erie and the railroad tracks, including many migrating songbirds and warblers.

And finally Sandy Ridge Reservation Lorain County Metropark, a 526-acre wetland and wildlife preserve in North Ridgeville. It has a 2-mile-long fully accessible loop trail that passes through songbird woods then encircles two man-made marshes, with benches along the way and on top of a central observation mound from which you can view the marshes from above. If two miles is too long a walk, Sandy Ridge offers guided birding-by-tram rides during the biggest week and later in May.

So get out there and enjoy The Biggest Week in American Birding.