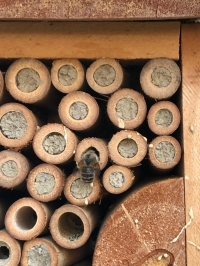 This little mason bee is busy at work building her nest!

On a whim, my husband and I bought a mason bee house that was on sale at a big box store. I am so glad we did! The more I read up on mason bees, the more fascinated I become. They’re some of the world’s best pollinators.

There are over 200 mason bee species globally and 140 species throughout North America. Mason bees are related to honeybees, but do not produce honey or live in colonies. Mason bees acquired their name from their habit of building their nests out of mud that looks like bricks. They are solitary bees, which means that they don’t have workers or queens either. These ladies are small but mighty and completely independent! Female mason bees are responsible for building their own nests, scouting and foraging for their own food and defending themselves.

When I tell people we have mason bees, they always ask, “Aren’t you afraid you’ll get stung?” That makes me laugh – they are not aggressive at all! If you do get stung, shame on you! You’d have to practically squeeze them before they would sting you and, even if she did, it’s less painful than a mosquito bite. As with other bees, the drones don’t have stingers.

Mason bees are extremely active. In fact, a single mason bee can pollinate as much as 100 honeybees can. The reason they are such excellent and valuable pollinators is that a honey bee will carefully store pollen in a pollen basket on their hind legs; whereas these ladies roll all around in pollen which sticks to their fur to collect as much as possible. They’re some of the busiest bees you can find, visiting almost 2,000 flowers in one single day!

Taking care of mason bees is incredibly easy and requires almost no effort at all. Mason bees are native bees, so unlike honeybees, there’s no need to buy them. You pretty much hang up the bee house and let the mason bees come to you. We hang our mason bee house on the back of the house underneath the eave. It’s important to locate the house away from the ground and preferably facing southeast. This gives them optimal sunshine on spring mornings, but guards them against it in the afternoon. Mason bees cannot regulate their own temperatures, and you don’t want them to overheat. Our bee house faces directly east and they’re doing just fine.

The first year, we had about 6 holes filled in our bee house. The next year, practically EVERY hole was filled and we even bought a second, larger bee house for them. It turns out that mason bees will rapidly flock to a favorable area. In late fall, we just store it in the garage and take it back out in mid-March. They hibernate in winter and it’s fun to watch the next generation emerge in spring.

In nature, mason bees are cavity-nesting bees. This means that they build their nests in existing holes, cracks, crevices, tunnels or other gaps in walls, hollows and even empty snail shells. They might even settle in abandoned tunnels created by other insects or animals. The mason bee houses are the perfect prefab home for them!

A mason bee will lay her female eggs at the back of the nest, and her males toward the front. This is the reason why the males emerge first. She creates sections within the tube, first collecting pollen and placing it in the tube, then they lay an egg. Following this, she sections it off with mud. Then she fills the next section with pollen, lays an egg and more mud. She repeats this pollen, egg, mud pattern until the tube is filled (about five to six eggs). A female will lay around 15 to 20 eggs in her lifetime.

A few days after an egg is laid, the larva hatches and spends about 10 days eating the nectar and pollen inside its nesting cell. Once it’s finished, it spins a cocoon and pupates within the cell, wherein it grows into an adult by the end of the summer. It stays in the cocoon throughout the winter and emerges in the early spring. Male mason bees emerge first. A few days later, the females follow. They almost immediately mate and, within three to four days, begin preparing for the next generation of mason bees.

Male mason bees only live for about two weeks and females make it to six weeks. There’s generally only one generation of mason bees up and running at a time.

As you can tell, we really enjoy our mason bees! They have such a huge impact on the environment and are so important in the pollination process responsible for a lot of our food. And, let me just say, there’s a reason the saying is “busy as a bee” – these ladies work from sunup to sunset! So, next time you see a mason bee house for sale (or not) pick one up and find the right spot on your house for it. Sit back and be prepared for a great show.